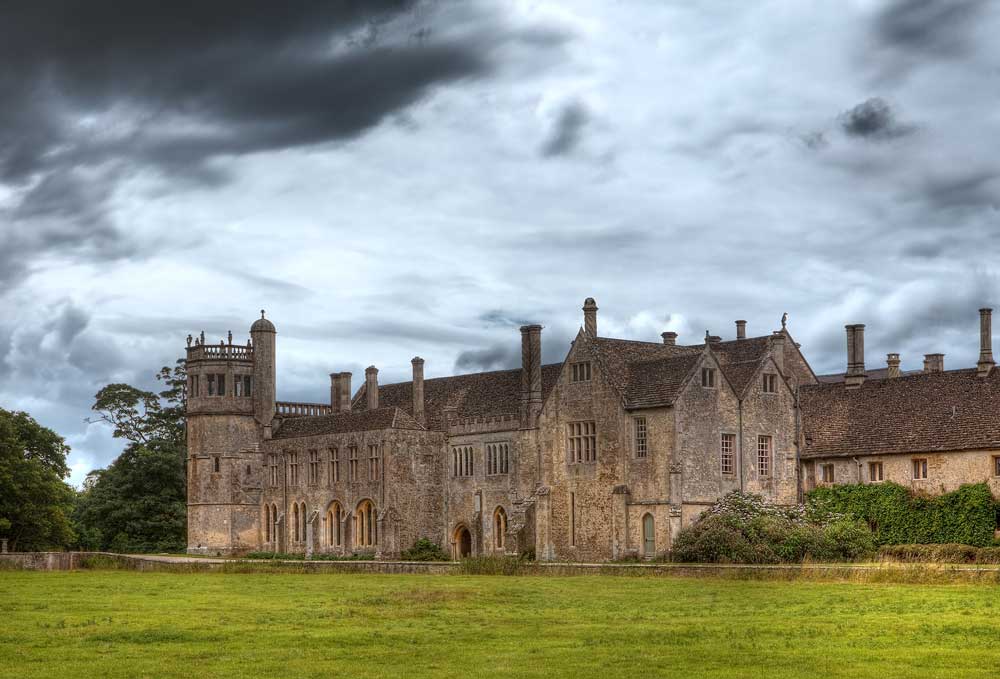 Lacock Abbey, dedicated to St Mary and St Bernard, was founded in 1229 by the widowed Lady Ela the Countess of Salisbury, who laid the abbey’s first stone 16 April 1232, in the reign of King Henry III, and to which she retired in 1238. Her late husband had been William Longespee, an illegitimate son of King Henry II. The abbey was founded in Snail’s Meadow, near the village of Lacock. The first of the nuns were veiled in 1232.

Generally, Lacock Abbey prospered throughout the Middle Ages. The rich farmlands which it had received from Ela ensured it a sizeable income from wool.

Following the Dissolution of the Monasteries in the mid-16th century, Henry VIII of England sold it to Sir William Sharington, who converted it into a house starting in 1539, demolishing the abbey church. Few other alterations were made to the monastic buildings themselves: the cloisters, for example, still stand below the living accommodation. About 1550 Sir William added an octagonal tower containing two small chambers, one above the other; the lower one was reached through the main rooms, and was for storing and viewing his treasures; the upper one, for banqueting, only accessible by a walk across the leads of the roof. In each is a central octagonal stone table carved with up-to-date Renaissance ornament.A mid-16th century stone conduit house stands over the spring from which water was conducted to the house.Further additions were made over the centuries, and the house now has various grand reception rooms.

In the 16th and early 17th centuries, Nicholas Cooper has pointed out, bedchambers were often named for individuals who customarily inhabited them when staying at a house. At Lacock, as elsewhere, they were named for individuals “whose recognition in this way advertised the family’s affinities”: the best chamber was “the duke’s chamber”, probably signifying John Dudley, 1st Duke of Northumberland, whom Sharington had served, while “Lady Thynne’s chamber”, identified it with the wife of Sir John Thynne of Longleat, and “Mr Mildmay’s chamber” was reserved for Sharington’s son-in-law Anthony Mildmay of Apethorpe in Northamptonshire.

During the English Civil War the house was garrisoned by Royalists. It was fortified by surrounding it with earthworks. The garrison surrendered (on agreed terms) to Parliamentarian forces under the command of Colonel Devereux, Governor of Malmesbury, within days of Oliver Cromwell’s capture of the nearby town of Devizes in late September 1645.

The Abbey also underwent alterations in the 1750s under the ownership of John Ivory Talbot in the Gothick Revival style. The architect was Sanderson Miller.

The house eventually passed to the Talbot family. It is most often associated with William Henry Fox Talbot. In 1835 Talbot made the earliest known surviving example of a photographic negative, a photogenic print of the oriel window in the south gallery of the Abbey. Talbot continued with his experiments at the Abbey and by 1840 had discovered the negative/positive process to record photographic images by chemical means.

The Abbey houses the Fox Talbot Museum devoted to Talbot’s pioneering work in photography and the original photograph of the oriel window he developed.

Lacock Abbey and the surrounding village were given to the National Trust in 1944. The Trust market the abbey and village together as Lacock Abbey, Fox Talbot Museum & Village.

Some interior sequences in Harry Potter and the Chamber of Secrets were filmed at Lacock, including the cloister walk where Harry comes out from Professor Lockhart’s room after serving detention and hears the basilisk. During four days in October 2007 Lacock was also used to film some scenes for the sixth Harry Potter film, Harry Potter and the Half-Blood Prince. Warner Bros. announced that the spooky nights of Hogwarts were also filmed here with most of the main characters including Daniel Radcliffe.

Why not visit Lacock Abbey  and other pretty Cotswold villages on one of our driver-guide or cycling Tours of the Cotswolds?

For a tour that visits Lacock Abbey